One of the primary science objectives of the Curiosity mission is to assess the habitability of ancient and modern martian environments. Curiosity is not searching for evidence for life, but is looking for the conditions necessary for life to survive, namely liquid water and the chemical building blocks for life. The rover has traversed over 26 kilometers searching for evidence of ancient habitable environments.
Throughout the entirety of the mission, ARES scientists have been involved in various rover operational roles (e.g., Payload and Downlink instrument leads, Science and Operations Working Group Chair, Operations Lead for CheMin, Long Term Planner, Geo Science Theme Lead) and have also interpreted science results. ARES scientists have presented these results at national and international conferences and published in many peer-reviewed journals. See our “ARES Team” and “Research Papers” pages for more information about how ARES scientists have contributed to Curiosity science and operations. Join us on this journey highlighting important discoveries made by the MSL team over the years (2012, 2013, 2014, 2015, 2016, 2017, 2018, 2019, 2020, 2021)

Bradbury Landing: The curiosity rover landed on Mars on August 5, 2012 Pacific Time (Aug. 6, Universal Time). The landing site is in Gale Crater, north of Mount Sharp.
Curiosity discovered an ancient habitable environment east of its landing site in a place called Yellowknife Bay. The rocks in Yellowknife Bay are made up of very fine-grained mudstone sediments, indicating that they were deposited in a tranquil lake environment. Data from the Chemistry and Mineralogy (CheMin) instrument helped scientists identify minerals that formed in fresh water under near-neutral conditions.
Data returned from the Sample Analysis at Mars (SAM), Alpha Particle X-ray Spectrometer (APXS), and Chemistry and Camera (ChemCam) instruments showed the presence of the chemical building blocks for life: C, H, N, O, P, and S. If life was present on Mars over 3.5 billion years ago, it could have thrived in Yellowknife Bay. 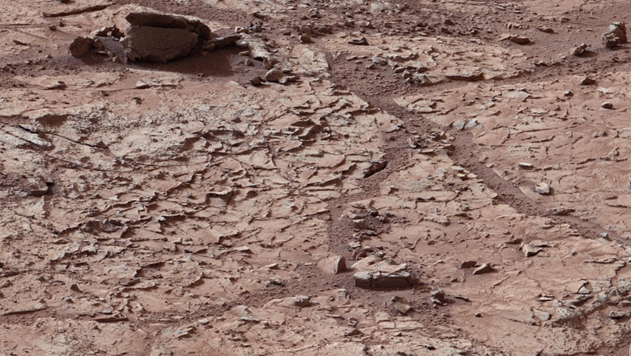 In 2013, Curiosity traversed over coarse-grained sedimentary rocks with rounded gravel clasts, closely resembling sedimentary rocks on Earth that form in river environments. These Martian fluvial conglomerates provide evidence for sediments being transported in water, as this is the only process on Earth that creates that unique rounding of the grains. The work by the MSL team on these rocks and processes was published in Williams et al., (2013). Martian Fluvial Conglomerate: Pictured above is a rock outcrop called Link that has characteristics consistent with a sedimentary conglomerate. Credit: NASA/JPL-Caltech/MSSS. 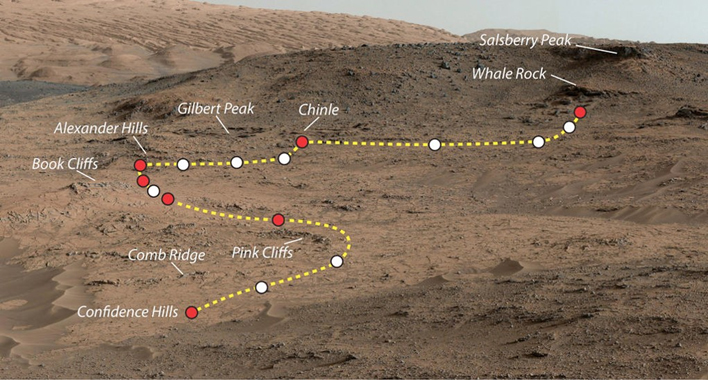 Curiosity's Journey through the Pahrump Hills: The yellow line represents the rover's route through the section, the white dots represent short stops for science investigations, and the red dots represent longer stops for science investigations. Credit: NASA/JPL-Caltech/MSSS.
These rocks are made up of fine-grained sediments with thin mm-scale laminations, suggesting these sediments were deposited in a lake environment. The discovery of lake sediments at Yellowknife Bay and the Pahrump Hills indicates that lake environments were persistent in ~3.5 billion-year-old Gale Crater sediments. Unlike the rocks in Yellowknife Bay, the rocks of the Pahrump Hills contain some minerals that are characteristic of acidic environments, including jarosite, an iron-sulfate mineral.
ARES scientists Doug Ming and Dick Morris have studied these minerals extensively on Hawaii Island (The Big Island of Hawaii) and Rio Tinto, Spain. The discovery of jarosite in the Pahrump Hills may indicate that acidic, iron- and sulfate-bearing fluids moved through these sediments after they had been deposited.
Beyond the Pahrump Hills in a location called Marias Pass, Curiosity discovered rocks that were enriched in SiO2. This discovery was particularly exciting because SiO2 (or silica) can be enriched through aqueous processes from fluids depositing silica or from fluids stripping away mobile elements and leaving silica behind. Curiosity drilled a sample called Buckskin and delivered it to CheMin.
In Buckskin, CheMin discovered a mineral that had never before been detected on Mars: tridymite. Tridymite is a SiO2 polymorph that forms under low pressure and high temperature (>800 °C). It is rare on Earth and is generally found in rhyolitic tuff deposits, where explosive, silicic volcanic eruptions deposited tons of hot ash.
However, the rocks in Marias Pass were part of the same unit as those studied at the Pahrump Hills and were also deposited in a lake environment. It is possible that the tridymite is evidence for silicic volcanism on Mars and was eroded from a rhyolitic tuff deposit, but ARES scientists are exploring other processes that could have formed the tridymite discovered at Marias Pass.

In 2016, Curiosity traversed an area called the “Murray Buttes”. These rock formations bare a resemblance to rocks in Utah and New Mexico. They formed through the burial of ancient sand-dunes, which were then chemically changed by groundwater and then exposed at the surface and eroded by wind.
Mastcam image of the Murray Buttes: This image shows the finely laminated rocks observed at the “Murray Buttes”. The offset layering observed in the image above is called cross-bedding, and forms by migrating sand-dunes. Credit: NASA/JPL

Between 2017 and 2018, Curiosity drove over an area of high elevation in Gale Crater called the “Vera Rubin Ridge” (VRR). Orbital spectral data showed that the VRR contained the mineral hematite, which sometimes forms through reactions between rock and water. In situ observations from Curiosity found that the VRR, much like previously examined rocks, formed in a lake environment and did not contain more hematite than other locations. Curiosity successfully drilled three rocks on the VRR using a new drilling method that had been in development by rover engineers for over a year due to a failure in the drill feed mechanism.
Chemistry and Camera (ChemCam) image of “Vera Rubin Ridge” showing sedimentary layers and mineral-filled fractures, taken on sol 1745 (July 2017): Source: NASA/JPL

Curiosity started its exploration of the clay-bearing “Glen Torridon” region in early 2019 after driving down the slopes of the Vera Rubin Ridge. Orbital spectral data showed that the Glen Torridon region contained clays, which suggest a wet, near neutral pH environment during or close to the time of deposition. Additionally, clays have been shown to preserve ancient organic material on Earth and could potentially aid in organic preservation on Mars. Curiosity drilled and analyzed several samples in the Glen Torridon region including Kilmarie, Mary Anning, Glen Etive, Hutton, and Glasgow to study the chemical, mineralogic, and environmental changes in this important unit. Mastcam image of “Mont Mercou”, showing fine laminations at the base of the cliff: This image shows the base of a 20 feet tall cliff called “Mont Mercou”. This cliff is made of mudstone with fine layers that were deposited by an ancient lake. Source: NASA/JPL
After analyzing “Nontron” at the base of Mont Mercou, Curiosity ascended the hill and drilled a sample called “Bardou” on top of the cliff as a comparison to the base of the cliff in order to understand any chemical and mineralogical changes. Curiosity then analyzed a sample called “Pontours”. SAM and CheMin data suggest that the mineralogy and chemistry of the rocks is changing in this region, possibly indicating that the rover is in the transition between the clay-rich Glen Torridon region and the Sulfate-bearing unit. As of September 2021, Curiosity is currently driving over sedimentary bedrock that contain nodules that appear to have formed through aqueous processes that post-date the deposition of the bedrock. Navigation Camera (NavCam) image of diagenetic nodules taken on sol 3210 (August 2021): This image depicts diagenetic features called nodules, which look like raised bumps on the surface of the rock. These nodules likely formed when water interacted with rock in the distant past. Source: NASA/JPL

Curiosity’s traverse (white line) from Yellowknife Bay towards Mt. Sharp: Curiosity has traveled over 26 kilometers since it started its journey at Bradbury Landing in 2012. Significant features that have or will be studied by Curiosity are labeled in white, and the location of the rover in August 2021 is indicated with a yellow star. Credit: NASA/JPL

The Curiosity Rover at Gale Crater